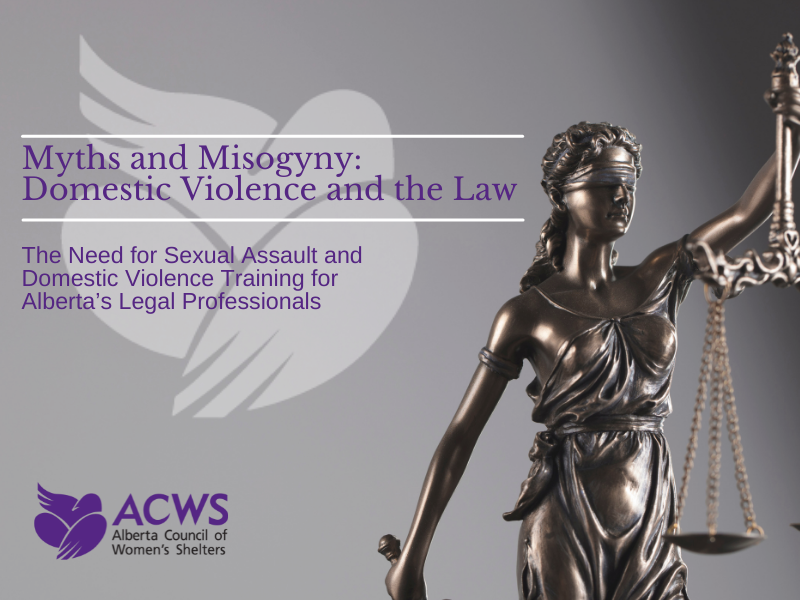 Content warning: this post discusses topics that may cause trauma to some readers, such as sexual assault, physical assault, domestic violence, and Missing and Murdered Indigenous Women and Girls.

On March 30, 2022, the Government of Alberta introduced new legislation requiring those applying to be a provincial court judge to complete sexual assault law and social context issues training before they are eligible to be appointed. The media release about the announcement stated that the new bill would “foster public confidence in the administration of justice, encouraging more reporting of sexual assaults and potentially greater engagement in the justice system by Indigenous Peoples, minorities and vulnerable populations.”[1]

If passed, Bill 14 could be an important step in the right direction.

“The sexual assault services in Alberta were both overjoyed and surprised by this unexpected announcement. We have been advocating for this for decades,” said Deb Tomlinson, CEO of the Alberta Association of Sexual Assault Services (AASAS). She added, “We strongly recommend that Alberta survivors and other sexual violence sector key stakeholders are involved in implementation.”

Indeed, Alberta has been the unfortunate location of a number of high-profile sexual assault cases in recent legal history, and consulting with local experts in the field, such as ASAAS, should be part of the process of developing and delivering training for Albertan judges.

Bill 14 might one day help prevent such outcomes as the 2020 trial and conviction of Matthew McKnight, which saw the former Edmonton nightclub promoter sentenced to a scant eight years in prison. Initially, McKnight faced 26 charges of sexual and physical assault from 21 different victims; ultimately, McKnight was only tried on 13 of the original 26 charges and convicted of 5. The Crown accused McKnight’s lawyer of perpetuating rape “myths” throughout the trial— legally prohibited lines of reasoning about how a “real” victim of sexual assault ought to act.[2]

Rape culture permeated many aspects of this trial. At the sentencing hearing, Marty Melnychuk, the general manager of the bar where McKnight worked, described the convicted rapist as “one of the best people I have worked with,”[3] advocating for a light sentence for McKnight. The judge seemed to support this positivity about McKnight, stating that the serial rapist’s chances for rehabilitation were “excellent.” In the end, McKnight was sentenced to only 1.6 years for every woman he was convicted of raping (and he is currently appealing to try and have it reduced even further).

As the verdict was delivered, “Women shouted, sobbed and in one case had to be hauled from the courtroom.”[4] One of the victims has described her experience with the court process: “If I had known it would be like this, I never would have come forward.” Among the first major Canadian cases of the #MeToo era, the outcome for the victims in this case was profoundly disappointing.

If justice has historically been underwhelming for Albertan women who come forward in cases of sexual assault, it is even more underwhelming for Indigenous and racialized victims of crime. The 2015 trial of Bradly Barton in the death of Cindy Gladue, a Metis and Cree mother of three who bled to death in an Edmonton hotel room, was a stark reminder of the racist and sexist stereotypes about Indigenous women that often influence court proceedings. That initial trial led to the acquittal of Barton, when the jury accepted the defense argument that Ms. Gladue had consented to “rough sex.”[5] As ACWS wrote in our response to the National Action Plan to End Gender-based Violence, “the initial trial dehumanized Ms. Gladue and the Supreme Court strongly condemned the use of racist and sexist stereotypes about Indigenous women by those involved in the case.”[6] Barton was later re-tried and found guilty of murder, but the emotional damage to Ms. Gladue’s family, community, and all women who witnessed this case unfold, cannot be undone.

Enhancing sexual assault law education for judges is clearly a much-needed step towards achieving justice in our province. However, Bill 14 as it currently stands is missing a key component that judges also need training on: intimate partner violence and domestic violence, an understanding of which is crucial in ensuring that victims are treated with dignity and that justice is served.

Sexual violence and domestic violence share many similarities when it comes to how they are treated in the courtroom. Myths and stereotypes abound, and misogyny and racism often play roles in how justice is administered. As Jennifer Koshan, a professor in the Law at the University of Calgary, wrote in her recent article on the subject, the argument “is not that courts should always believe survivors, but that courts should be prepared to consider social context, including common myths and stereotypes about IPV, to inform their credibility decisions. False or faulty assumptions about the veracity of IPV claims, or about the harmful impact of IPV, can have serious implications for the safety of women and children.”[7]

Dr. Miranda Pilipchuk, Research and Evaluation Coordinator at ACWS, recently published a research brief which has been submitted to the House of Commons Standing Committee on the Status of Women, titled “Intimate Partner Violence in the Courtroom.”

Dr. Pilipchuk’s brief outlines the case of the Albertan grandmother, Helen Naslund who, on October 30, 2020, received one of the longest sentences in Canadian history for killing her abusive husband.

Naslund survived an extensive history of abuse by her husband, which included him threatening both Naslund and their son with a gun and flying into an increasingly agitated tirade the night before Naslund killed him.ii These abuses were well-documented in an agreed upon statement of facts Naslund’s lawyer filed on her behalf when she pled guilty to manslaughter, however, her plea deal sentenced her to 18 years in prison. Naslund’s sentence is substantially longer than the average sentence abusive men receive for killing their intimate partners. According to Statistics Canada, men convicted of manslaughter in cases involving intimate partners receive an average of six to 12 years in prison.iii Naslund’s sentence is 50% longer than the highest sentence in that range. Justice Sterling Sanderman, the judge who presided over Naslund’s case, commended the “fairness” and “maturity” of Naslund’s sentence,iv characterizing the shooting as “a callous, cowardly act on a vulnerable victim in his own home,” and suggesting that Naslund could have simply left her husband instead of shooting him.v

The Alberta Court of Appeal has since reduced Naslund’s sentence to nine years, finding that the original sentence reflected “outdated thinking” about intimate partner violence (IPV), and calling for Alberta courts to change their approach to IPV cases.vi The Court’s recognition of the impact of IPV on survivors and the necessity that courts take this impact into consideration is an important step forward for all survivors of IPV. Nevertheless, Naslund’s case provides a stark example of how much progress is still necessary for courts to adequately understand and address IPV. As Justice Sheila Greckol notes in the Court’s majority opinion, the Crown prosecutor, Justice Sanderman, and Naslund’s original defense lawyer all failed to understand and account for the role IPV played in this case.vii This failure of understanding resulted in the disproportionate punishment of an abuse survivor.

Naslund’s case is unusual in terms of sentence length, but the failures of understanding that led to that sentence length are, unfortunately, all too common. Three decades of research have established that judges, prosecutors, and defense lawyers often have inadequate understandings of IPV which substantially influence how survivors are treated in both civil and criminal courtrooms.viii Much of the common knowledge about IPV is based on misunderstandings that fail to accurately reflect both the realities of IPV and the experiences of survivors.ix In the absence of formal education about, or direct experience with, IPV, judges and lawyers might automatically rely on these misunderstandings as a framework for approaching cases involving IPV.x Courts that rely on these misunderstandings are at high risk of reproducing the harms of IPV instead of counteracting them.[8]

Dr. Pilipchuk makes four recommendations, which ACWS suggests should also be included in Alberta’s Bill 14. We call for expanded legislation that includes specific training on domestic and intimate partner violence for judges and legal professionals. Dr. Pilipchuk’s and ACWS’s recommendations are that:

ACWS has taken an important first step in its recent partnership with the Legal Educational Society of Alberta, to offer optional domestic violence training to lawyers. This is only a beginning, and much more comprehensive training is needed for all legal professionals.

Bill 14, if it is adopted, could be a powerful tool in improving the legal system for victims of sexual violence and domestic violence. We sincerely hope that our recommendations will be incorporated into Bill 14, that and that local expert organizations in these fields, such as AASAS and ACWS, will be included in the roll-out of this much-needed training.

[5] Paradis, Danielle. “The Death Of Cindy Gladue, And The Criminal Defence Tactic That Should Alarm Every Woman in Canada.” https://www.chatelaine.com/opinion/cindy-gladue-and-criminal-defence/

[7] Koshan, Jennifer. “#Don’tDisbelieveHer: Towards Recognition of Myths and Stereotypes about Intimate Partner Violence at the Supreme Court of Canada.” https://ablawg.ca/2022/04/13/dontdisbelieveher-towards-recognition-of-myths-and-stereotypes-about-intimate-partner-violence-at-the-supreme-court-of-canada/