The ACWS Leading Change: Inspired Communities model, containing a description, bibliography, glossary, checklist and graphic. Made possible in part with the financial support of Status of Women Canada.

Domestic violence is an epidemic in our country with Alberta having one of the highest rates of domestic violence homicide in Canada. Each year approximately 12,000 women, children and seniors fleeing domestic violence and abuse seek refuge from abuse, pain and fear with one of the 41 Alberta Council of Women’s Shelters (ACWS) member organizations.

In the last decade and a half, prevention has become a central focus of community and government efforts to address violence against women. This reflects the recognition that we must not only respond to the survivors and perpetrators of interpersonal violence, but also work to prevent violence from occurring in the first place. We must address the underlying causes of gendered violence, (physical, sexual, mental, etc.) in order to reduce its frequency and ultimately eliminate it.

These elements are integrated and coordinated in a comprehensive, systematic approach that we believe is required to make long-lasting and transformative change. This model represents initial ideas based on a needs assessment, literature review and our experience. Pilot testing of this model over the one year period helped us refine it further and describe it in more detail. While the model elements are discussed separately, they interact with each other and reinforce each other, as illustrated in the info-graphic.

Supporting Agency: group with expertise in the sector who provides leadership to the program and grounds the work in the experiences of women and collaborates with the Key Delivery Group.

Key Delivery Group: group within a particular community who makes an ongoing commitment to work in the community to end gender based violence over the long term. Assisted by the Supporting Agency.

Community: Specific geographic area or group of people to engage and empower to make change.

Selected Participants: Although we hope to impact and work with all individuals and groups of people within the community, the principal audience of the call to action that the programming is directed at, written for, and delivered to. This group will have a detailed demographic profile. (Age, culture, economic considerations, etc.)

Influencers: Individuals, organizations, community, and institutions/government all have influence within the community and the power to make change. Based on readiness, they may be engaged by the Community Mentors to identify the Selected Participants. Some may be called upon to use their influence specifically with the Selected Participants through the model’s activities.

Our prevention approach reflects the recognition that we must not only respond to the victims and perpetrators of interpersonal violence, but also work to prevent violence from occurring in the first place.
Prevention efforts take place before the problem starts and help address the underlying causes of physical and sexual violence, in order to reduce rates of violence and ultimately to eliminate it altogether. Prevention focusing on men and boys in the main approach of the ACWS Leading Change™: Inspired Communities model.

Informed by women’s organizations and experience

Women should be involved in the design, implementation, monitoring and evaluation of model activities to reinforce an ethical, human rights and gendered perspective. This will ensure effective approaches that are empowering to and authentic for women.

Attitudes, beliefs, behaviours and practices are deeply rooted in their specific cultural norms, values and traditions. The factors that lead men to use violence and the impact of that violence may be experienced differently in communities across Canada.

For this reason, particular attention should be paid to the impact of social pressures and oppressions and how gender intersects with social differences such as: class, education, language, experiences of immigration, race and ethnicity, sexuality, age and disability. It is imperative that cultural and language diversity and related attitudes, norms and diverse socio-political realities be considered in the planning, delivery and implementation of prevention practices.

It therefore follows that a truly transformative initiative should include a wide cross-section of audiences and participants who differ across gender and age (e.g. men and boys, women and girls), cultures and countries (e.g. multicultural and Aboriginal communities and newcomers to Canada), geographic locations (urban and rural Alberta), as well as ability and sexuality.

Strength-based approaches focus on collaboration, growth, empowerment and hopes as opposed to guilt, shame or fear.

Showing positive examples of equitable, non-violent behaviour helps foster more meaningful and long-term change. Men and boys are motivated to take on positive leadership roles when their ability to be leaders is affirmed and empowered by those they trust and respect. Positive roles can be encouraged through bystander interventions, peer and near-peer mentoring, role modeling by fathers or other male role models and engaging community or organizational leaders as mentors.

Violence against women runs counter to the basic rights and freedoms every person should have. Therefore, programming should share and be explicit about abiding by these values and the commitment to women’s human rights and gender equality. Men should be empowered to discover that equality for women benefits all.

Social norms and cultural expectations are root causes of power imbalance, inequality and violence in our society

Violence against women and girls is still most often perpetrated by men, largely influenced by cultural messages about masculinity, gender roles and relationships, violence and power. By creating a greater understanding of male privilege, prevention programming can address men’s attitudes that either produce or condone violence against women and encourage men to intervene with other men by shifting harmful stereotypes of masculinity, as well as working towards their enlightened self-interest.

Most violence prevention work with men and boys has been local in scale and limited in scope.

To be effective at the societal level – to transform violence against women and girls and the pervasive gender inequalities with which it is associated – work with men and boys needs to be scaled up. In particular, programs that reach beyond the individual level to be part of the social context show more effectiveness in producing behavior change than programs that focus on individuals only.
This requires programs to be integrated, incorporating community outreach, community mobilization and mass media campaigns. To truly transform gender inequalities, we must go beyond scattered, small-scale interventions and move towards systematic, large-scale and coordinated efforts. Commitment to long-term and coordinated efforts means that capacity-building approaches represent an integral part of the work, and ensure that the work can be sustained.

The initiative’s reach will impact all levels of our society: individuals, organizations, communities, governments and institutions, as described below. Together, these four groups influence changes in attitudes and beliefs. 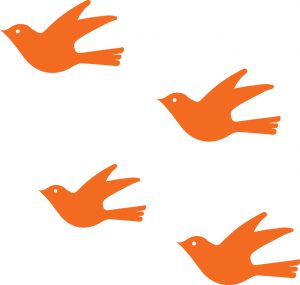 Individuals involved in these initiatives will span the full life cycle from pre-school to adulthood and include men, women, youth, boys and girls. The particular group of individuals that is involved in a specific project will depend on the place where they congregate and can include fathers who are part of fatherhood programs, men in domestic violence prevention programs, men and boys on sports teams, men and women as members of geographic or cultural communities, parents, school staff, youth, boys and girls in schools, and/or involved in extra-curricular activities.

Organizations may include clubs, sports teams, educational institutions, (such as schools and universities), service or treatment settings and workplaces.

For example, sports settings are places where masculine traditional norms are formed and enforced and offer opportunities for mentoring and influencing coaches and athletes. Workplaces provide access to men in leadership roles in many fields, particularly those dominated by men (e.g., business, politics, police, legal, etc.). Employers can play an important role by sharing information and hosting training to develop skills and motivate employees, clients, consumers and partners to become engaged in efforts to end violence against women. Programs in schools with children and youth can have a positive and lasting impact on their attitudes and behaviors, particularly if they include opportunities for skill development and mentoring, an understanding of gender-based violence, address norms related to dating violence and are embedded within the school curriculum.

Community is defined as a social group of any size, whose members reside in a specific locality, share government, have common interests, religion or race or share cultural and historic heritage.

Institutions are societies or organizations founded for an educational, social, or religious purpose and devoted to the promotion of a particular cause or program.

Institutions can include governments as well as educational, public service or cultural organizations.Government is defined as any legislative body that can influence broad level policies, legislation and funding. First Nations, Municipal, Provincial, Federal and School Boards, for example, may be involved in a variety of prevention approaches outlined below. Willingness of those institutions to be open to communication or dialogue is essential as are strong relationships with individuals in a position of authority within different levels of government who can be champions and mentors.

This model includes four key activities that reinforce each other and must be implemented together and sustained over a long-term in order to create transformative change.

These approaches will use targeted messaging through different communictions media to invite and inspire individuals to take ownership of the issue, and become motivated to lead from where they stand to end violence and abuse against women and girls. 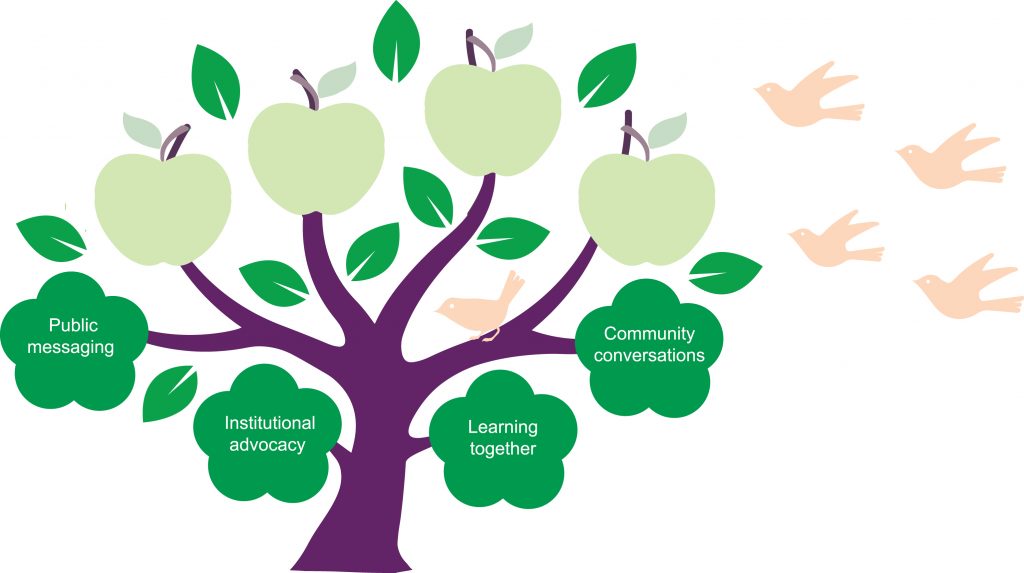 Sustained, comprehensive, audience-targeted public messaging that aligns with the model’s values has the ability to make the content more accessible, reach more people and reinforce learnings.

Communications tactics that deliver the messaging include media coverage (editorials, articles, and advertising through television radio, newspapers and internet), social media channels, web pages, passive advertising (e.g. posters), promotional items (e.g. tee shirts with slogans) and educational materials (e.g. brochure). The tactics chosen in each community are best determined by who the Selected Participants are as well as their major Influencers, what channels and resources are available in each community to reach them, as well as the organization’s capacity to sustain them.

In addition to adhering with the values in this model (strength-based, positive, inclusive, includes gendered context, etc.), successful public messaging on this issue:

Community conversations are also necessary to change behaviours which foster a culture of violence against women.

These types of activities usually seek out legislative bodies and governments with a primary purpose of influencing policies and legislation or producing legal and policy reforms that support healthy community norms and a violence-free society. Institutional advocacy activities may include working with government officials or organizational leaders to support policy development or change, securing funding, developing position papers, or mobilizing service providers for long-term advocacy.

These types of approaches include training sessions, workshops on bystander interventions as well as one on one support, role modeling or peer or near-peer mentoring with individual participants. The focus of these activities will be to share information, facilitate discussion and enhance skills related to addressing the issue of gender based violence. In order to be consistent with the core values of the model, Learning Together activities will be strength-based, positive and build on mutual respect and shared power between the facilitators and the participants.

We believe that integrated, systematic and coordinated programming rooted in consistent and clear values such as described in this document will help produce change at a societal level and prevent violence against women and girls. We hope that this work, if sustained long-term, will result in transformation of cultural and gender roles and, ultimately, a peaceful society.

Evaluation is an important component of the engagement model. Model implementation has been tested by the Alberta Council of Women’s Shelters and community partners over the course of a year, supported by Status of Women Canada. Long term implementation with associated evaluation will ensure that lessons learned and emerging insights can be documented and inform model revision and refinement. The following framework delineates key outcomes of model implementation that can be adapted to reflect specific project focus.

Develop and strengthen the skills of men and boys, working in partnership with women and girls, to identify and respond to issues of gender-based violence in their communities. 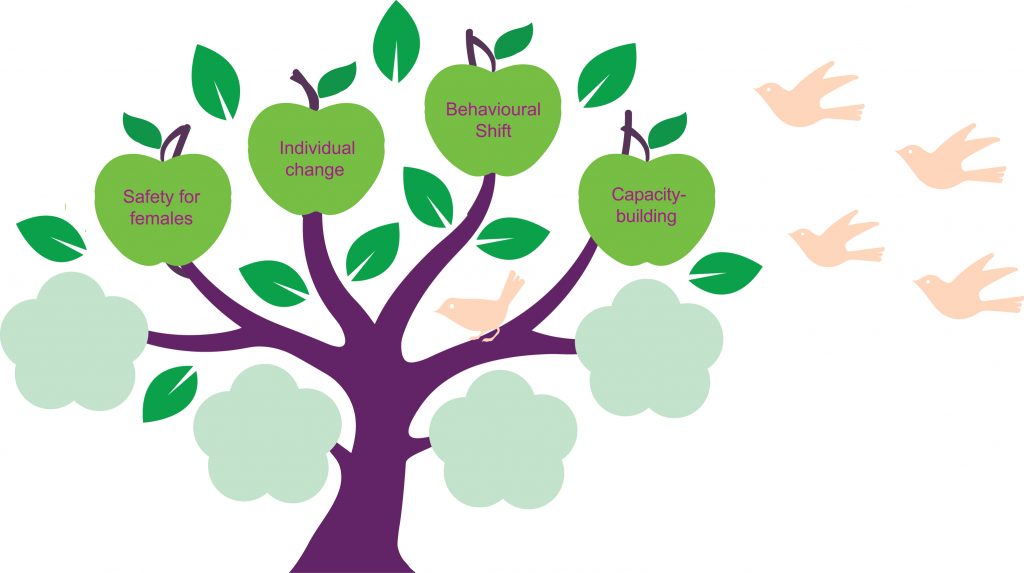 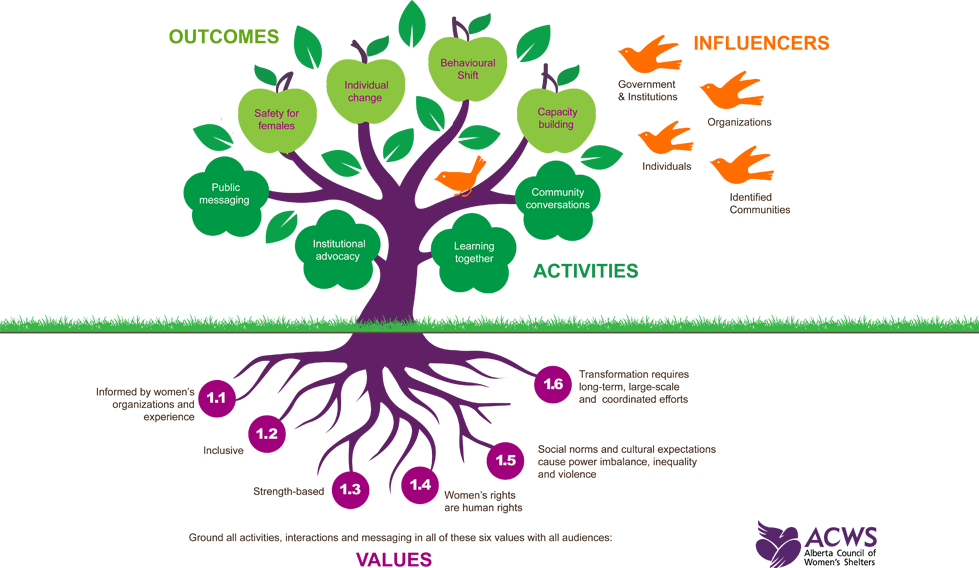 In clarifying this, you will know: