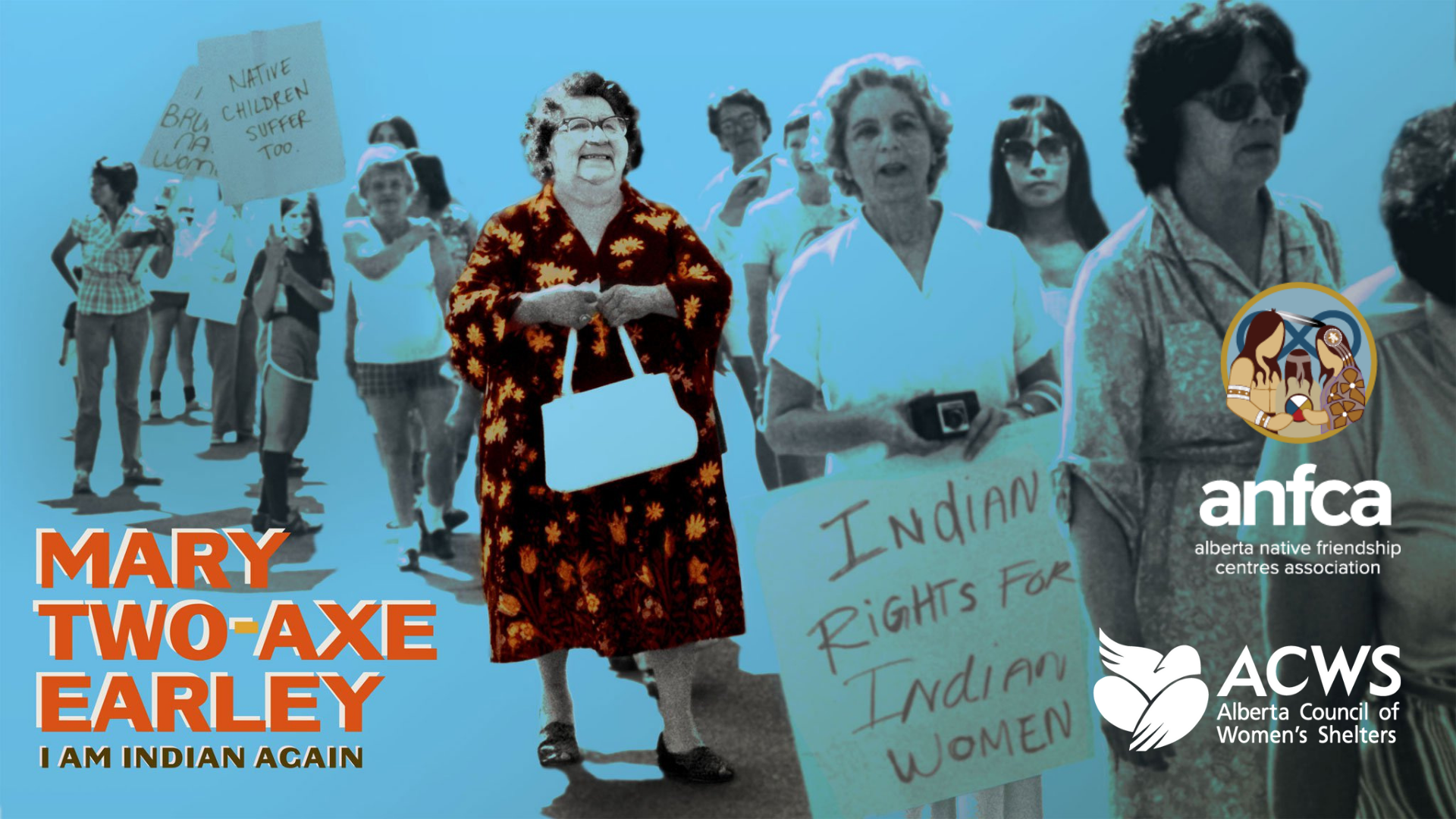 Join us for a virtual screening of Mary Two-Axe Earley: I Am Indian Again followed by a live panel discussion with filmmaker Courtney Montour and guests.

Montour speaks with Cree activist Nellie Carlson, Mary’s lifelong friend and co-founder of Indian Rights for Indian Women, and meets with three generations in Mary’s kitchen in Kahnawà:ke to honour the legacy of a woman who galvanized a national network of allies to help restore Indian status to thousands of First Nations women and children.

The virtual screening is FREE to attend for ACWS members, staff, and shelter clients.

It is also open to the public, by donation. All proceeds from the event will go to the Alberta Native Friendship Centres Association. 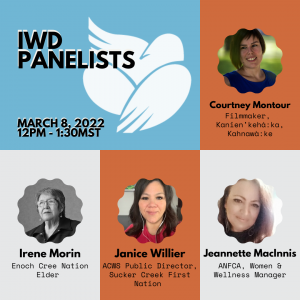 Courtney Montour is Kanien’kehá:ka (Mohawk) from Kahnawake. She works in the documentary film and digital media fields exploring issues of Indigenous identity. She directed, wrote and co-produced Flat Rocks (2017), a short documentary revealing how the development of Canada’s St. Lawrence Seaway forever changed the landscape and the livelihood of the Kahnawake Mohawk community. Her first documentary Sex Spirit Strength won Best of Festival and the Emerging Filmmaker award at the 2016 Yorkton Film Festival. She has directed episodes for several documentary series including Mohawk Ironworkers (2016) and Skindigenous (2021). Courtney co-created and coordinated McGill University’s Indigenous Field Studies course, held in Kahnawake, for 8 years. Passionate about educating, the course surfaces the intergenerational effects of colonization and Canadian policies on contemporary Indigenous society.

Irene is a resilient Indigenous woman who, after overcoming hardship and adversity at a young age, rose to become a celebrated community leader. Throughout her lifetime Irene has demonstrated an indomitable spirit, resilience and optimism. She is fiercely proud of her culture, her people and her community; she has tirelessly dedicated herself to building bridges and advancing the interests of Indigenous peoples.

Today, Irene is an Elder of the Enoch Cree Nation. She is a survivor of the Blue Quills Indian Residential School in Alberta, and credits the institution for providing her a solid educational foundation.

Irene’s extensive career included working in the 1960’s for what was then the Department of Indian Affairs, and later for the Edmonton Separate School Board, Native Counselling Services of Alberta, the Senate of Canada in Ottawa and for the Enoch Cree Nation for nearly 30 years.

Irene has been recognized for her outstanding contribution to her community and province. In 2002 she received the Queen Elizabeth 11 Golden Jubilee Medal and in 2017 she was a recipient of the Senate of Canada 150 Anniversary Medal. The “Queen’s Golden Jubilee Medal was awarded by the Governor General of Canada to “those who have made outstanding and exemplary contributions to their communities or to Canada as a whole”.

The Senate of Canada 150th Medal recognized those who “through generosity, dedication, volunteerism and hard work, make their hometowns, communities, regions, provinces or territories a better place to live” and “outstanding individuals” whose work reflects the “values of diversity, acceptance, generosity, fairness and equality”.  As reflected by these accolades, Irene has, throughout her life, led vital initiatives and enriched the lives of those in her community.  She was the founder and driving force behind the Annual Aboriginal Role Models of Alberta Awards for more than 25 years. Though officially retired, Irene still volunteers for causes close to her heart, including the Alberta Council of Women’s Shelters and the World Indigenous Games. She was instrumental in bringing the Games to the Enoch Cree Nation.

As the former Director of Health and Ending Violence initiatives at the BC Association of Aboriginal Friendship Centre’s Jeannette has an extensive background in a multitude of social determinants of health and wellness areas including poverty. Jeannette has been a strong advocate for the health and well-being of women, with an expansive academic and professional background on the issue, extending as far afield as the plight of women in the Democratic Republic of the Congo.  Jeannette has been highly active in the movement to end violence against women and girls, including human trafficking, sexual exploitation, and domestic and family violence with participation on many provincial and national committees and projects. She previously sat on the board of directors for the Battered Women Support Services (BWSS) for 4 years, and BCs Community Coordination for Women’s Safety provincial working group for 5 years. Nationally, she sat on the Canadian Women’s Foundation and a former National Advisory Committee on the prevention of human trafficking and exploitation of Indigenous women and youth. She is currently the Women & Wellness Manager at ANFCA.

Janice is from Sucker Creek First Nation in Treaty 8 territory and currently resides in Edmonton with her partner and two sons. Janice works for Indigenous Services Canada as a Program Liaison Officer, but was previously part of the Mental Wellness Unit where responsibilities included overseeing the Indian Residential School Support Program, the Elder’s Advisory Committee and the Missing and Murdered Indigenous Women & Girls’ Pre-inquiry process. She has always been a strong advocate for Indigenous people, particularly in the health field, and brings her expertise and knowledge to her role on the board. Janice is an ACWS Public Director.